Corset Alterations and Some Mythbusting


Hello! I am writing to you this evening from Glasgow, Scotland, which is my new home for the next 12 months or so. I'm here doing my masters degree in Museum Studies: Dress and Textile History, which is very exciting. I had about a week of turnaround time between flying home from Williamsburg (*sniffle*) and flying here (hooray!) so it's all been a bit of a whirlwind. However, somewhere in that whirlwind I have managed to get some stuff done!

First up is the alteration I just finished on my 1876 blue silk corset. I loved the shape from the front, but the back made me unhappy. The lacing gap was about 2" too large if I laced it so the gap was equidistant from top to bottom, even though the waist and hips actually fit quite well. The problem was the lack of ease through the upper ribs and shoulder blades. This was preventing the corset from pulling as tightly around the waist as it should have done, and generally making it...well, wrong. It wasn't really uncomfortable, and it looked okay; it just didn't sit right. I probably could have left it, and it would have been functional, and looked good from most angles. But it wasn't what I intended, and I knew it could be far, far better. And I am, above all else, a perfectionist, and sometimes I am a slave to my own perfectionism. Once the idea is in my brain, it's going to happen whether I like it or not.

So I fixed it.


See what a difference that makes? The waist isn't actually smaller, but it looks sharper because my ribs now have room. That myth about squashing ribs to make the waist smaller? It's ridiculous! The more ease - *extra* room - you give to your ribs and the top edge of your corset, the more extreme the waist looks without lacing down far at all, and the more room for flesh displacement there is, which means you can actually lace your waist down further if you've put extra room above and below it.

Post-alteration, my corset now actually looks a lot closer in silhouette to my inspiration corset (even though my figure is quite different from the one the extant example was intended for, with my long waist, wide ribs, and lack of bust).


So anyways, I'm very happy with the results of all of this. Here are a few more photos for you. I just bought my ticket to Prior Attire's Victorian Ball in Bath this spring, and I'm planning to wear this corset under my gown, so it will actually get some use. 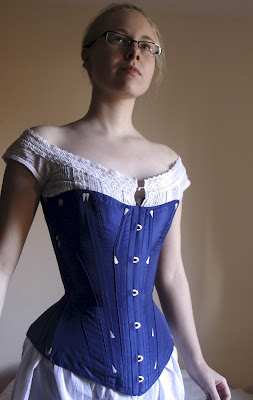 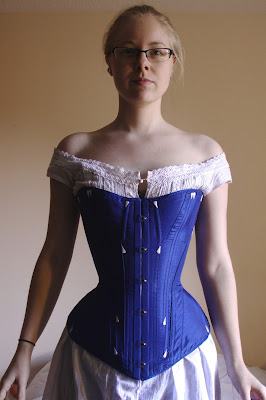 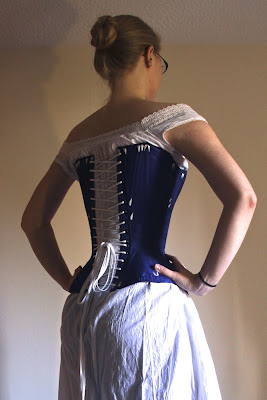 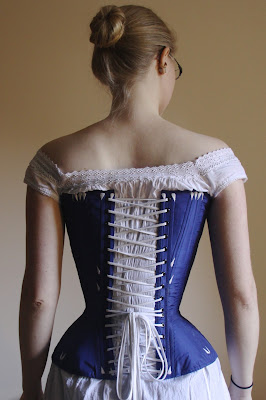 Other than that, I'm working on some 18th century stuff - just finished a wool petticoat today and started working on a muslin cap, and will be beginning a quilted petticoat sometime next week (wheeee! finally!). I'll hopefully be posting some photos soon from a photoshoot some friends and I have planned for this weekend. Until then, you can find more frequent updates on facebook at Isabel Northwode Costumes.

Posted by Isabel Northwode at 13:20

Background image: a quilted petticoat of emerald silk taffeta, mid-18th century, which I had the pleasure of examining at Dalhousie University.

Isabel Northwode
Hey! I'm Peryn, known in the SCA (and other reenacting) as Isabel Northwode. I'm a reenactor, a costumer, a singer, and also a student, currently studying the history of dress. I have a facebook page (Isabel Northwode Costumes) and an Instagram (@peryn.wn), which I update with random thoughts and photos as I work on projects. Finished dress diaries go here. I'm currently based in Scotland, but I'm originally from Toronto, Canada.