This one was actually done about two weeks ago - well inside the challenge deadline - but I was so preoccupied with getting the corset done that I never took photos or posted about it.

For March's challenge, stashbusting, I decided to finally make the 18th century mitts I'd been planning for so long. I do still plan to make bias-cut silk ones with embroidered finger-triangles, but for now I just needed something to cover my arms with the short-sleeved jackets. (On a side note: there's a weird rumor floating around the non-costuming part of the internet that mitts were for propriety, like covering Victorian ankles. I don't even know where to start with that one.)

Anyways, a couple of years ago my mom gave me a beautiful ivory cashmere sweater that had some holes in it because she thought I might be able to use the lace edging. I do plan to use that, too, but my first thought was actually that I could use the sleeves to make mitts. 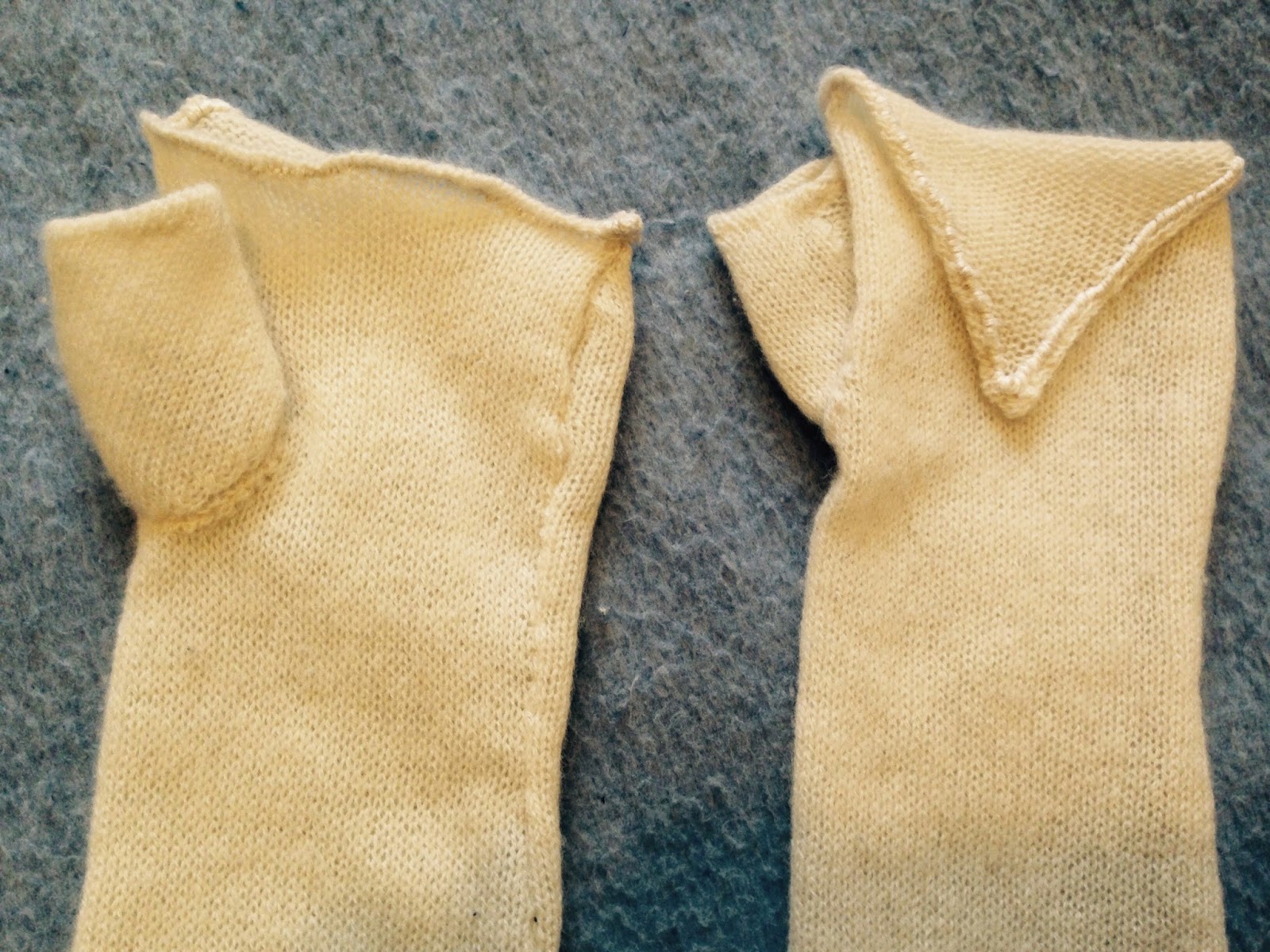 There are many 18th century and early 19th century examples of knitted mitts, both in advertisements and in the form of extant examples:

Advertisements list wool, silk, and linen as possible materials for knitted mitts, and women might either purchase fine pairs or knit their own. Homemade knitted mitts were knit in the round, but my research suggests that some examples made for sale were frame-knit and seamed. Additionally, some retailers advertised that they specialized in turning old stockings (presumably those with worn-out heels and toes) into mitts (I have since lost the advertisement proclaiming this, but I have been informed by others that a reference to the same may be found in Linda Baumgarten's What Clothes Reveal, 2012. As I do not own this book, I cannot confirm whether this is true, nor provide a proper reference).

My own mitts are hand-stitched together from pieces cut from the original cashmere sleeves, and the edges are whip-bound in silk floss. Cashmere, although available by the 18th century in the form of 'Kashmir' shawls, would not have been made into mitts. Additonally, mine are a bit workaday and cobbled-together for such a fine material (as compared with, for instance, the pink silk ones above). But they're shockingly warm for such a flimsy thing, and they look right, so for now they'll do.

The Challenge: March - Stashbusting
Fabric: frameknit cashmere sweater, silk floss (both from my stash)
Pattern: my arm
Year: late 18th century (early 19th century versions don't often have the finger triangles)
Notions: none
How historically accurate is it? Eh, maybe 65-70%? I'm reasonably sure that frame-knit mitts of fine cream or ivory wool are period, and extant examples show edges occasionally bound in silk. However, mine are made of cashmere, which was not yet available in this form, and my silk edging isn't quite the same as that seen on extant mitts.
Hours to complete: 4 or 5, with the edge-whipping and blocking
First worn: around my house when I'm cold
Total cost: $0, right now. A few years ago the silk floss cost about $25, and I have no idea what my mom paid for the sweater originally. 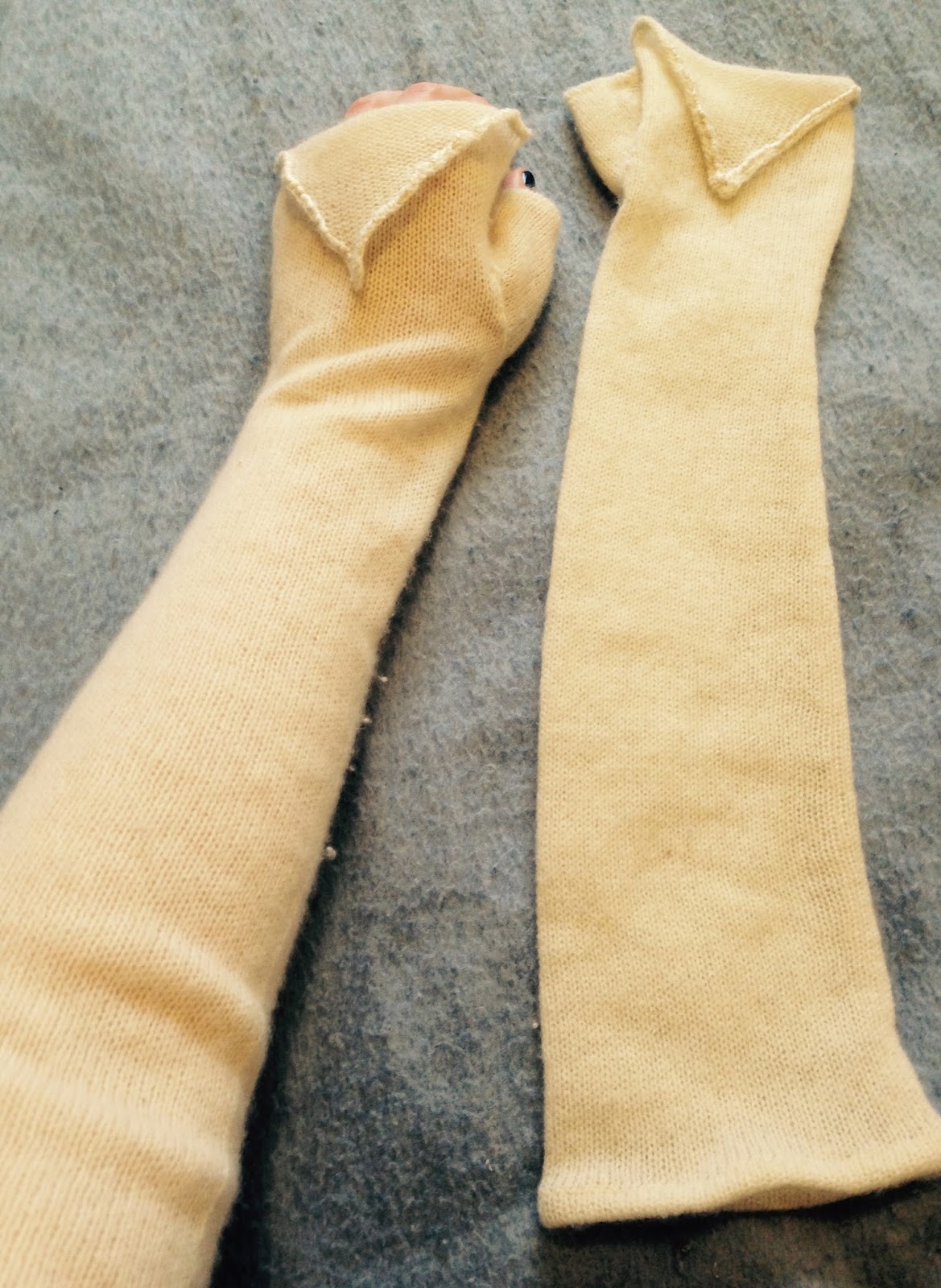 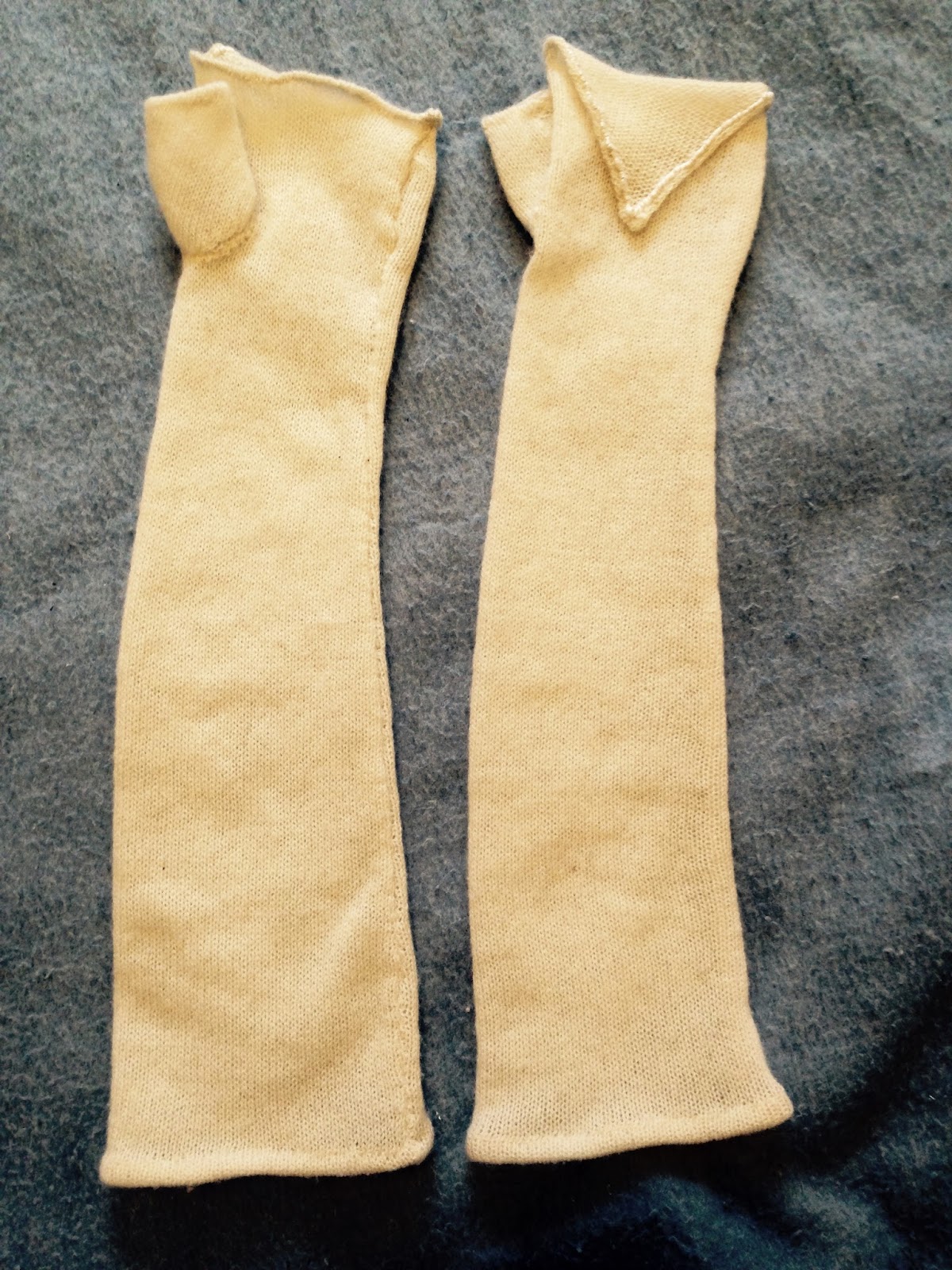 So there you have it! Somehow I managed to be late on this, even though I finished it over my March Break vacation. Sigh. And now I'm plunging into my 1770s stays, which I highly doubt will be done by the April challenge due date. Oh well. =)

Posted by Isabel Northwode at 12:03

Background image: a quilted petticoat of emerald silk taffeta, mid-18th century, which I had the pleasure of examining at Dalhousie University.

Isabel Northwode
Hey! I'm Peryn, known in the SCA (and other reenacting) as Isabel Northwode. I'm a reenactor, a costumer, a singer, and also a student, currently studying the history of dress. I have a facebook page (Isabel Northwode Costumes) and an Instagram (@peryn.wn), which I update with random thoughts and photos as I work on projects. Finished dress diaries go here. I'm currently based in Scotland, but I'm originally from Toronto, Canada.